I’ve purchased two magic lanterns and some nineteenth century slipping slides, lever slides and chromatropes, as well as a large collection of nineteenth century life model slides, from an auction. I’ve got the two lanterns working with LED floodlights that produce no heat or UV light. I’m having a fantastic time playing with these wonderful things. But as practice-led research I have discovered that it is extraordinarily difficult to change and focus the slides,  and manipulate and animate  the slides smoothly. Lanternists in the nineteenth century would have needed to do that as well as keep their patter going in a large hall without amplification, regulate the gas supply to their limelight, and control often unruly audiences. I’m looking forward to spending some time with Trove because I want to read the newspaper reviews of these performances, when Australian audiences were training themselves to sit together in the dark. Below is some of the equipment I’m working with, and a link to a seminar I organised last year.

The Projected Image Heritage of Australia and New Zealand

Rock of Ages hymn slides, as projected outdoors by the Salvation Army in 1894 in Melbourne 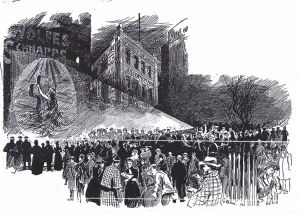 Salvation Army outdoor projection of Rock of Ages hymn slide on the side of a hotel, Melbourne 1894 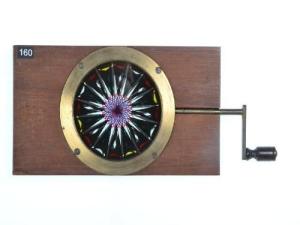 A slipping slide, moving the glass slightly produces a moire patterns from the scratched paint 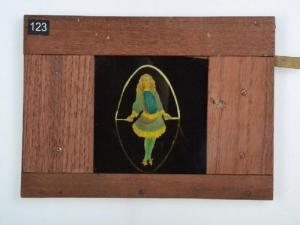 The skeleton removes its head