It was great hanging out with Campbell Gray, Gordon Craig and Michelle Helmrich at the UQAM, as well as s well as Maurice and Camilla from the QCP, and meeting the dealers for James Casebere and Yao Lu at the No Place, opening. The only bead I could get on their work and the work of Lori Nix and Giacoma Costa for my opening speech, was ‘apocalypse’, the text is below. 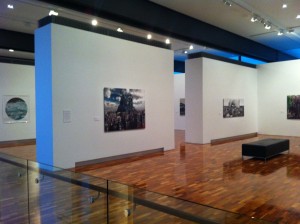 No Place show at UQAM

‘Hasn’t the weather been strange lately, could it be a warning?’ Perhaps you found yourself saying this, or something like this, to one of your friends recently. It sounds so contemporary, so much part of our current anxieties, but in fact it is the strap-line from the poster for a 1977 Australian film by Peter Weir called The Last Wave. The film ends with a huge tsunami hitting modern Sydney, as foretold earlier in the film by local aborigines with their ancient wisdom, and ignored by whites with their hubristic civilization. I’m starting with films of apocalypses because that is the only point of entry I can find into this intriguing show. I’m afraid that Gordon Craig’s title for his show, No Place, just doesn’t do it for me, nor does the idea of ‘home’which he floats in the catalogue. And ideas of dystopias and utopias, the ideas I first started with in an attempt to wrap my head around this difficult show, also didn’t get me very far. But I think the idea of apocalypse does give me a point of entry, because apocalypses are about contradictions, and I think that this is also a show of contradictions.

Peter Weir’s movie is only one of a long stream of apocalyptic movies, and it comes from the same period of the disaster movies that have influenced some of the artists here, movies like The Poseidon  Adventure 1972 (from which I still bear the scars) and others like Towering Inferno and Earthquake from 1974. Before the wave of seventies disaster movies we had nuclear apocalypse movies like On the Beach 1959 or Doctor Strangelove 1964; and now there are a new crop of disaster movies, many featuring zombies, such as Danny Boyle’s 28 Days Later, 2002, where this generation’s anxieties are played out. I think apocalypses must be hard wired into us as humans. They are certainly a fundamental part of all the world’s major religions, and vivid apocalyptic scenarios can be traced back to the millenarian cults of the Dark Ages. I grew up in Brisbane in the shadow of another potential apocalypse — all-out nuclear annihilation, and now in Canberra my children cheerfully tell me that they will be dead before they reach my age because I’ve personally brought on climate change for them and, as a result, the sea levels will rise and the crops will fail for their generation.

And this is the thing about apocalypses, they unite the micro with the macro, the seemingly inconsequential with the cataclysmic, and the personal with the epochal.  In the Dark Ages, or in certain parts of the South in the United States, if we didn’t individually pray to Heaven we’ll be left behind at the last trump. In the sixties, if we didn’t adequately prepare, we would be left as a thermonuclear shadow on the ground. And now, if we don’t each reduce our carbon footprints, sea levels will rise. And this is where apocalyptic scenarios come in, my personal carbon footprint will raise sea levels less than a micron, but collectively we are all in trouble.

Apocalyptic scenarios are personal: they are about our individual responsibilities and our personal failures, but they are our failures scaled up, from the human to the cosmic. And this is why I think a lot of work in this show is apocalyptic: it does not simply recreate scenarios that might be familiar to us from science fiction movies, but the activity of the artist’s labour itself, working with an exacto knife, fome core, polymer clay and glue, day after day, to create intense miniature worlds, which are then reproduced at massive scale, I think taps into a deep redemptive impulse. It takes Lori Nix seven months to build one of her dioramas, at about a metre across, of cities drowned by time; and she then photographs them, from the precise angle for which they were built, on an 8 x 10 view camera — the highest-resolution of recording there is. This shift from the hand-crafted table-top world do the high-resolution print creates a strangely uncanny image — one reminiscent of dreams, of the aftershock of the psychic impact on us of movies we were really too young to see at the time  — but it is also a measure of the distance that needs to be bridged between the personal and the epochal.

There is labour in the digital too. One just has to stay to the end of the long roll of credits at the end of any contemporary science fiction film to realize that Hollywood’s outsourced CGI and VFX labs are the sweatshops of the post-industrial age, building cathedrals of illusion pixel by pixel, rather and stone by stone. The digital artists in this exhibition have also sweated laboriously to maneuver pixels into place with their Wacom Tablets. Yao Lu’s collages, of sublimely monumental piles of rubbish in China, use revered and ancient compositional references which project China’s mountains of rubbish, to which a blind eye can still be turned, into the future where they will — apocalyptically — come to define ‘Chineseness’ itself.

Giacomo Costa’s digital illusions unite urban architecture with geology and climate in an extended epochal timeframe where the human is so ephemeral it cannot even register. But their main impact on us as images comes, again, from the contradictions in scale: the microscopic detail of his vectoral models and texture maps, against the breadth of his vistas.

So there are contradictions within the images that I think are really important. The contradictions are essentially those which the very oxymoronic phrase ‘photographic fictions’ sets up. But these contradictions are also an essential truth: the Earth indeed will drown if we don’t change our ways. We will steal the future from our own children unless we can imagine — fictionalize — future scenarios scary enough to make us change, and compelling enough to connect or own micro lives with the macro fate of humanity.

Not only are there contradictions within the images, but Gordon Craig has also set up a contradiction within the show. James Casebere has been doing table-top work since the seventies, when Thomas Demand was still a boy in short pants, and his work has always been about the American mythos, often with a touch of postmodern irony. But here I think the irony is getting more pointed. At first glance the cardboard houses of Dutchess County have a Tim Burtonesque quirkiness, like the opening shots to Beetlejuice or Edward Scissorhands. These houses, with their cheap-ass, hokey and homey Americana architecture, probably hold all the normal suburban secrets, but nothing too challenging — at first glance, that is. Casebere’s table-top fiction was inspired by an actual scene which he saw from a freeway where, he says, he: ‘discovered the spread of cookie-cutter McMansion subdivisions, all mixed up with the unplanned ad-hoc triumph of vernacular taste, and a carbon footprint spun out of control.’ The Global Financial Crisis, with its Sub-Prime Mortgage fallout for Americans, had just hit; but rather than just photographing an historical crisis, or an aesthetic crisis in taste, Casebere had also presaged on apocalyptic crisis. It is the everydayness of this scene, with its ‘carbon footprint spun out of control’, that we must continue to imagine and reimagine, fictionlise and document, in order to keep all of its implications for our future in mind.