I’m Canberra’s ‘ghost guy’, so when staff from the Faculty of Art and Design at the University of Canberra wanted somebody to open their exhibition Traces and Hauntings at Belconnen Arts Centre who were they going to call? I was delighted to, of course. When thinking about which angle on their work I could take I was pleased to come across this photograph in the Sun Herald (02/08/2015).  The shot was taken by Phillip Gordon of Newcastle, who observed and photographed figures with rifles and their kit by their sides who appeared on the Memorial wall in light rain. Spookily, the person Mr Gordon had come to pay his respects to, Bert Keepence, who had been killed at Lone Pine 100 years before almost to the week, had worked for the Water Board! A spokesperson for the War Memorial said it was just water stains on the sandstone, but as Mr Gordon said, “It blew me away for a bit”. Magical images persist, and are still reported on in our newspapers. 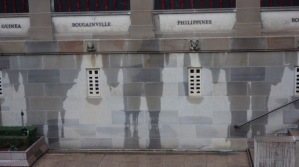 Ghosts of Gallipoli formed on the wall of the Australian War Memorial, Sun Herald, 2 August 2015