The Rolfoclasts with their attempts at Rolfoclasm are at it again!

In 1986 Rolf Harris painted for Warrnambool’s Lighthouse Theatre a lovely mural in vivid tones of ‘outback red’ and ‘charcoal black’, presumably supplied by  British Paints. The mural, with its artful paint drips and edge-of-the-brush paradiddles, has roots reaching deep down through Pro Hart and Eric Jolliffe, picking up some hints of panel van on the way.

Yet through a primitive idolatorous thinking that comes from the dark ages, some equate the  painting of a  landscape by a pedophile with the act of pedophilia itself. Purely to expiate their own unresolved anxiety over the epidemic they equate a painting with the man, and want to erase both. They are putting pressure on the Warrnambool City Council, who have already voted to cover the mural up. That was never going to work. “Hiding the mural behind perspex is exactly what’s been happening with sexual abuse,” Warrnambool City Councillor Peter Hulin said. “We’re covering it up and pretending it’s not there.” But the iconography of  bush hut and blasted sapling seems innocent, is there something secretly encoded in the onanistic brushwork?

Of course covering the mural does nothing to address the issues that cause pedophilia. I’m sure I’ve gone to restaurants where paedophiles have worked, driven on roads they have built, and so on and so on. And covering a mural is one thing, erasing Rolf from my psyche is quite another. You only have to whisper ‘Caractacus’ in my ear and Rolf’s interminable version of Court of King Caractacus starts up all over again in my head. Once seen, Jake the Peg cannot be unseen. Will everybody who, like me, was a television addict in the 1970s have to submit to neurological erasure?

Rolf painting the mural in 1986

The mural before its cover up, now threatened with total destruction

The Variety Club mural before the Rolfoclasm

Rolfoclasm continues. Not only has he now been stripped of his Australian Honours, but he’s been painted out of the Variety mural at Victoria Markets and replaced with Stuart Wagstaff! But, hang on a minute, wasn’t Wagstaff the face of Benson and Hedges for decades? Didn’t the 116 ciggie ads — ‘when only the best will do’ —  which he knowingly made right up until the day cigarette advertising was finally banned in 1976 (then remaining on the B & H payroll until 1993) lead to the deaths of thousands of innocent Aussies? This shows the moral ambiguities which await any ‘clast when they self righteously take upon themselves the power of ‘clasm.

Now that his trial has faded in our memories it is possible to take stock of the new punishment spectacles being developed in our society. In this case the body of the condemned was not available for public torture, but his self-caricature of a face — thick glasses, fussily groomed facial hair, and  lasciviously darting tongue (always, we realised, incipiently Mephistophelian) — still haunted our memories. But this man was an entertainer, a creator, and even an artist of sorts. This not only made us, his naive and innocent audience, obscurely sinned against as well, but it also conveniently left us with a stock of his works — songs, paintings and murals — which through a process of sympathetic magic could substitute for his body. We could pillory these instead. Songs were ceremoniously  removed from playlists, murals were ceremoniously painted over, and so on. Individuals took it upon themselves to correct the collective historical record on all of our behalves. The works destroyed or erased weren’t great, and weren’t even, in the end, all that numerous, but nonetheless I found this medieval hysteria worrying. Because of his crimes he may have forfeited some of his rights, but not his moral rights as an artist. Who will be next? 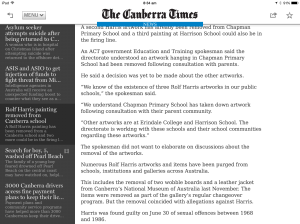