It was wonderful to see  the film London Road the other day at the movies. It’s musical shot in the dourest of colours — even the flowers that finally bloomed at the end, after the neighbourhood serial killer had been banged up to rights, seemed to have the colours on their petals rationed as though it was still World War Two. The film was the adaption of a stage musical based on recordings of actual interviews with actual English residents in 2006 (which we finally heard over the end credits). The librettists had lovingly repeated and chorused each captured speech inflection, each glottal stop, each rising ‘yeah’ at the end of the sentence. It was a film that could only have been made in the UK.  It made me think of Nick Park’s claymation Creature Comforts, then further back through all the angry kitchen sink dramas of the fifties, then back through the Mass Observation Movement and finally to the GPO Film Unit of the 30s and 40s, with Humphrey Jennings’ wonderful stiff-upper-lip vox pops with stout fire wardens and  unflappable matrons. The title even echoes Jennings’ blitz masterpiece London Can Take It!. I came over all patriotic and I’m Australian! 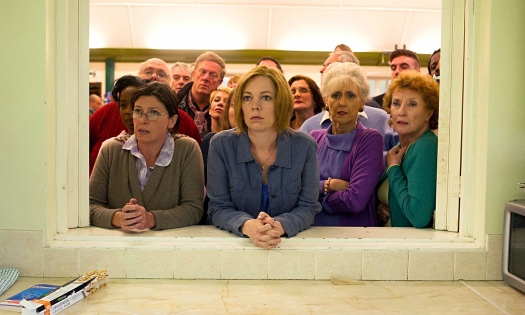