Working through Anne Zahalka’s excellent website Zahalkaworld I came across this old essay of mine, so I OCRed it.

If you wanted to write the story of recent Australian photography you could say that, about ten years ago, some photographers of Anne Zahalka’s generation found themselves engaged in a kind of oedipal drama with the grand traditions of photography.

They began to doubt whether photography’s contiguity with the real automatically guaranteed the privileged access to social, historical and psychological truth which it claimed for itself. They also doubted whether the camera’s internalisation of Renaissance perspective automatically created a universal language innocent of contextual inflection.

Against photography’s core documentary and transcendental traditions they counterposed an array of critical strategies: a deliberate play with its significatory codes; a seditious appropriation of its most persuasive and pervasive images; and a provocative flirtation with either the theatrical or the filmic mise-en-scene.

Photographic denotation now came chaperoned by irony. And the viewer’s simple delight in the photograph’s self-evident truth was displaced by a knowing complicity with the photographer’s intertextual virtuosity.

Very good. And all, by now, more than familiar. But perhaps, in the heat of their battle, these photographers surrendered what remains one of photography’s main functions – the recording of our social environment. In their strategic opposition to the assumptions that underpinned photography’s entrenched, but exhausted traditions —such as Documentary — they neglected the task of ‘The Social Record’. The two are not necessarily identical.

You don’t have to look far past the critical spotlight to see that the visual representation of our current historical formation is still in the thrall of those who are themselves enthralled by dead photographies. Not only does the Australiana book-mill continue to churn out their all too familiar images of ‘social history’, but even our galleries have an institutional stake in maintaining the continuity of their own art-historical investments.

Of course no theoretically aware photographer ever believed that their critiques of the dominant traditions would revolutionise the mainstream of visual representation, or even end up as anything other than yet another art-historical moment. But by re-addressing their obligations to The Social Record on their own terms, and re-using the visual tactics developed in their skirmishes with the problematics of picturing, a long overdue re-occupation of abandoned territory can begin. Photographic records of us, which are now no longer beholden to the monosemic truths of the documentary tradition can circulate in the media.

Take Bondi for instance. How can you photograph somewhere which is not so much a place, as a site for the contestation of nationhoods? Bondi is invested with so many different meanings by so many different people that it resembles one of those thick, gluey wads of rival dance-party posters which slowly slough off hoardings under the increasing weight of their own commitment to splintering cultural identity. Or perhaps it’s more like a bus shelter onto which so any messages have been sprayed that no one graffitist’s contribution is actually legible. How do you photograph Bondi without simply adding another layer to this furious accumulation? To document it – to collect its ‘characters’ and ‘sights’, and celebrate its freedom’ and ‘diversity’ – is simply to do what Bondi already demands, expects and requires: it is only to confirm it as the effect of prior representations, and therefore further aggrandize its mythological status. How, then, to record it without also succumbing to it?

Bondi, we are often told, is the place to which overseas visitors and Australians are equally attracted. They flock there in a kind of instinctual migration. But Bondi is no originary site, it is the birthplace of nothing and has been sanctified by no momentous events. Its significance as a place resides solely within the national rituals it is witness to every day. The flocking tourists are drawn to the various versions of Australiahood which are eternally enacted there. It is only when they arrive that they realise that they have contracted to be both spectator and spectacle, because the symbolic economy of Bondi runs on mutual voyeurism and exhibitionism.

If Bondi has no ‘essence’ other than the eternal flame of enactment, then maybe the time-honoured conventions of the stage are a way of recording it. With this in mind Anne Zahalka turned the amphitheatre at the back of Bondi Pavilion into a temporary stage cum studio. She strung up a backdrop onto which had been painted three broad bands of sand, sea and sky; she brought in some of the beach’s sand to spread over the concrete; she unrolled some Astro-turf; and she dragged in a few park benches and picnic tables. Bondi wasn’t so much recreated as imploded.

Under a mixture of sunlight and artificial fill-light Bondi’s cast of character-types hold themselves in timeless containment. Each pose typifies and distils the parts they play. Each tableau illustrates one aspect of Bondi’s cultural cavalcade. These portraits share their premise with the nineteenth century studio portrait — in which backdrops, clothing, furniture and pose were similarly deployed in order to firmly install the sitter in a pre-existent social niche. Their air, however, is quite different. Rather then the solemn density of the nineteenth century studio, Bondi’s players are portrayed in the transparent gelato colours of an imagined ‘perfert day at the beach’ – cool, charmed, and impossible.

But this imploded, distilled, typified Bondi no longer performs its usual function of invitation and promise. All the other photographs of Bondi we have seen, from postcards to sociological studies, say ‘where are you, why are you absent from this census of flocking Australians?’ Anne Zahalka’s formally complete images do not invite us to enter them. Only in these closed tableaus is our absence not included, because there has been no place left for us on the stage.

As The Beach Inspectors adopt their characteristic stance to gaze into the infinity of nature we certainly recognise Bondi, but we also realise that the inspectors are really only staring at the painted backdrop which hangs a mere four feet in front of their noses. We are therefore not invited to identify or anticipate, but rather to observe, compare and notice. We observe the firm plant of their feet, we compare their broad backs and sensible hats, and we notice how their walkie-talkies are worn in such a way as to draw our attention to a lifesaver’s best assets.

The Japanese honeymooners photographed being photographed in Tourists are, as always, cute as buttons. But now they are not simply our spectacle, and we are not theirs. Instead it is Bondi’s economic exchange of mutual spectacle which we see.

Although Anne Zahalka photographs the various cultural sub-groups that make up the ‘colourful’ population of Bondi, she is not interested in describing ethnicity as it is accommodated within the bureaucratic regime of Multiculturalism. Each of her characters, although typified, is not abstracted – each retains his or her particularity. In her photographs, as in Bondi itself, Asians hang with Asians and Anglos hang with Anglos. And judging by the inflated poses brandished by some members of those groups, Bondi’s sun has provided no benediction for broader social conflict.

She also addresses that aspect of Bondi with which it has been associated the longest — the nationalist surf-cult of health, strength and purity. The historical phallo-anglo-centrism of Australian beach culture is addressed in two pastiches which appropriate key icons from our collective beach memory. In the classical beach Arcady of Charles Meere’s 1940 painting Australian Beach Pattern the white nuclear family is presented as the paradigm of the Australian race. The Australian body is painted as though it was the finest product of Imperial engineering – almost as smooth and powerful as an aircraft engine. In Anne Zahalka’s elaborate restaging the physical individuality of mortal flesh is re-introduced, breaking both the metaphorical connection between the natural family and the national race, and the historical nexus between the colonial beach and the Imperial battlefield.

Similarly, the shock of red hair and pale skin of her The Sunbather #2 gently lightens the masculine weight of Max Dupain’s monument to Modernist bodily architecture — his Sunbaker 1937. But her images are not just the blank parody of Postmodernist pastiche. Within this context they serve to record a Bondi which is changing on both a material, and an ideological level.

Finally, acting as visual pauses within the exhibition, are photographs of ‘raw’ nature – the sun, surf and sky which were painted onto the backdrop. This is Nature’s Infinity – Bondi’s gift to the city of Sydney. But in this context the ambiguous squares of abstracted Nature lose all their pre-cultural significance. The ‘natural’ of Bondi is not a tabula rasa upon which we have written our culture. There never has been a clean bus shelter or an unpostered hoarding at Bondi. The Natural is something which is always already deployed within the culture of Bondi. For instance, the munificent bounty of the sun now becomes an insidious, cancerous threat just as it once caused madness and sunstroke. The cleansing briskness of the surf now becomes a toxic source of infection, just as it once threatened the pioneers with shipwrecks, sharks and drowning. Similarly, Anne Zahalka’s squares of nature only become a natural landscape within their specific cultural context.

If you wanted to establish the importance of this show you could say that, at last, it indicates the beginnings of a return by some of our photographers to what will always be one of photography’s primary tasks — the maintenance of The Social Record. Yet in recording Bondi today it continues to refuse an easy nostalgia for the truth of Bondi. The beach remains the stage it always was. 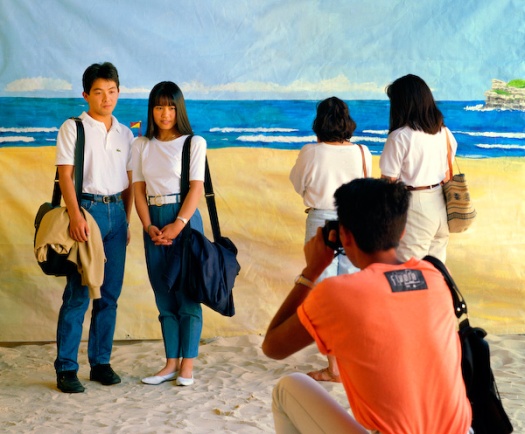 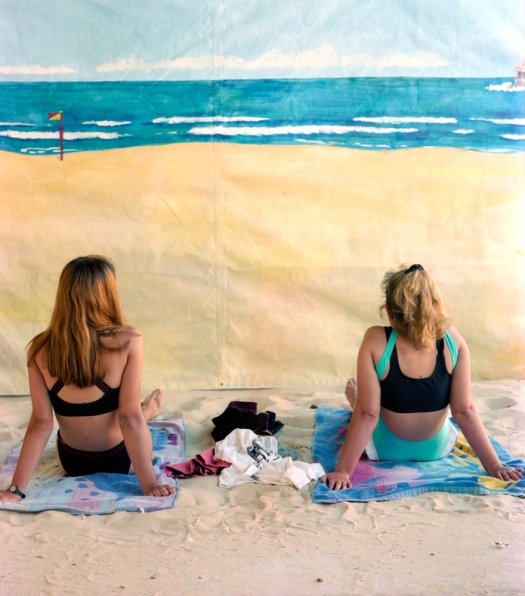