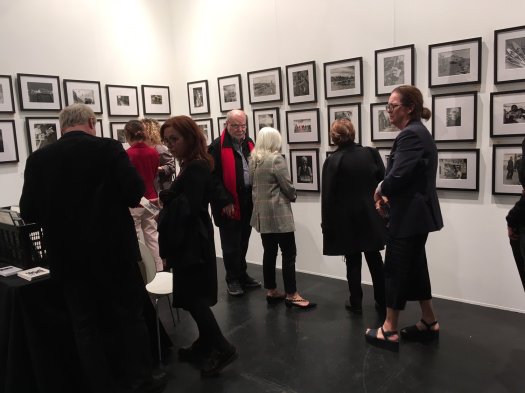 Can we ever forgive the hapless Fairfax beancounter who, in 2013, thought he had solved at least one of the troubled news organisation’s many financial problems? Their massive archive of deteriorating photographic negatives and prints was costing a motza to house and maintain, and without a rapid program of digitisation it was going to be hard to monetise it. His answer was to do a deal with an Arkansas sports memorabilia dealer, John Rogers, who said he would buy two million physical items from Fairfax for $300,000 along with the agreement that he would catalogue and scan them. Rogers could sell the physical prints and Fairfax, who always retained copyright, could licence the digital images. In the words of Fairfax executive Garry Linnell, shipping two million negatives and prints overseas would  ‘preserve them for future generations’ of Australians. There were several problems with the deal. As anyone who has done it knows, digitising two million items  is an enormous task, and properly cataloguing them even more so. As it was, Rogers was only ever going to use high speed document scanners, yielding at best low resolution files of little monetary value and little use to our visual heritage. The second problem was that Rogers was a conman.

Shortly after the collection of Australian and New Zealand photographs was shipped off to Little Rock in late 2013, prints which hadn’t even been scanned yet, even at low resolution, were beginning to turn up on eBay. The receiver later estimated that up to a thousand images may have been skimmed off before digitisation even began. Rogers became unresponsive to requests from Australia and then, in early 2014,  the FBI raided him. He was later convicted of fraud, became bankrupt, and a sizeable chunk of Australia’s heritage fell into a legal limbo. In 2015 we in Australia who love photography stared in open mouthed dismay at the ABC’s Glenn Sloggett like images of padlocked warehouse doors beginning to be choked by weeds in the outer suburbs of Little Rock.

Then in 2017 came the news that California’s Duncan Miller Gallery had purchased the entire collection, still estimated to be around two million items.  The new owner of the physical archive, Daniel Miller, reasoned that even though the copyright of images taken after 1955 still resided with either Fairfax or the original photographer, the ’pieces of paper’ could perhaps return him around four dollars each from Australian institutions as a bulk purchase, and considerably more for the ‘name’ photographers who had found their way into the archive, such as Jeff Carter, Max Dupain, Olive Cotton, Wolfgang Sievers and David Moore.

Miller launched a website with the rather Peter Allenesque url of hometoaustralia.org. He sought corporate sponsorship, and came to Australia in 2017 to speak to curators from major collections and go on breakfast TV. In 2018 he had a booth at Sydney Contemporary showing some of the collection in art frames. To aid their repatriation, and the return on his investment, the gallery did a new taxonomic survey of the collection, dividing them into 500 different thematic categories.

So far they estimate that they have sold about 160,000 photographs back to various Australian collections, including the Bradman Museum who have  purchased 24,000 cricket photographs, and Beleura who have purchased 20,000 theatre photographs. Last weekend the Canberra Museum and Gallery announced they had purchased 3,500 Canberra photographs, many from the Canberra Times, at $20,000. A good deal.  They plan to work with the University of Canberra to do the cataloguing that John Rogers promised and didn’t do. They still have to negotiate with the original photographers or Fairfax, which has now been swallowed by the media conglomerate of Nine Entertainment, to reproduce the post 1955 images.

Can we ever forgive that Fairfax executive? No we can’t. But what does this farrago tell us? Firstly that photographs, whether physical or digital are equally vulnerable. Australian photography is full of similar stories at varying degrees of apocrypha — of collodion being cleaned off plates for green house windows, of glass plate negatives being used for road ballast, and so. There are also stories of rescue missions, which is how the Duncan Miller Gallery see their work. For instance in 1929 the bookseller James Tyrell brought 7903 negatives from the Charles Kerry and Henry King studios, which were then sold to Australian Consolidated press in 1980, who donated them to the Powerhouse Museum in 1985. Secondly, it throws into relief the legal separation between the three values that photographs have always had: ownership, display and reproduction. Thirdly it brings to the fore an  increasingly important photographic value — searchability.

Fairfax did eventually got back a set of digital files from Rogers’ receiver in Arkansas. They are probably of low quality anyway, but without even a searchable interface they are next to useless. The physical archive’s current owner, the canny Duncan Miller Gallery, has realised the importance of the interface. While they have certainly capitalised on the short list of proper names of Australian photography in the collection, whose prints can be sold as individual ‘art works’, the gallery also realised they needed a ‘team of archivists’ to generate five hundred new separate categories out of the raw A to Z sequencing of the images. Major Categories, from ‘Aboriginal people’ to ‘Yachting’; Smaller Categories, from ‘Abacus to ‘Witch Doctor’’; and Personalities and People, from ‘Aboriginal people’ to ‘Zoo’. It remains to be seen how useful potential clients in Australia will find these newly generated search terms in approaching the vast opaque repository of images in America. But what is certain is that issues of the archive are only just beginning to come home to us.

3 thoughts on “Why is an archive when it is lost?”