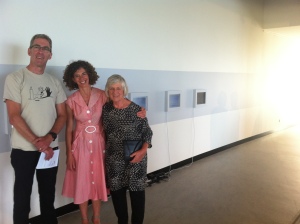 John Macdonald, Louise Curham, and her mother Val at the opening 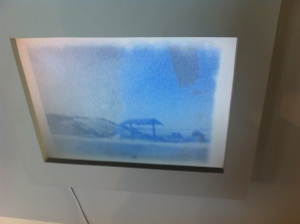 One of the works.

For those that missed it. The performance of Larry Sitsky’s 1975 piece The Legions of Asmodeus, re-performed on four theremins including one by Stanislaus Ostoja-Kotkowski on which the piece had been initially performed in front of Prime Minister Gough Whitlam in 1975, and which was restored by Alistair Riddell and Stephen Jones with a RSHA grant I got, is available at:

there’s a general link for the night at:

Fogies iPading the back of the theremin 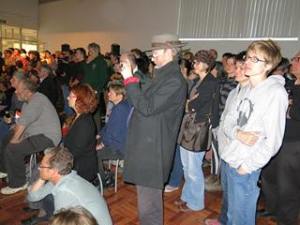 Stephen Jones recording the performance on his phone

This year it’s been great to be invited to be in shows: by Cathy Laudenbauch and Patsy Payne for a show at the Front in Canberra called Undertone, and by Mary Hutchinson and Ruth Hingston for a show called Shaping Canberra at the ANU School of Art Gallery. The Shaping Canberra show went along with a conference also called Shaping Canberra, at which I gave a paper called Art from Archives, the paper’s in the writing part of this blog, at the end I talk about the work I did for the show thus:

I’ll finish by talking a little bit about a small installation I have in the show which is opening tonight. In my head I divide the history of Canberra into two periods. There is the utopian period from its foundation to self-government, where Canberra was used by the Commonwealth Government as a model of an ideal Australian polity, and a kind of ideal template for a future Australian city. During this utopian period, which in my imagination peaks in the 1960s,  Canberra was tolerated as a noble experiment by most Australians. Then there is the distopian period from self-government till now, where Canberra is regarded by Australians and governments alike as parasitical, perverse, pretentious, indulgent and ‘out of touch’. In both these Canberras there are no actual people. In the distopian Canberra of today the people who live here are despised as a vitiated, degenerated, foppish sub-category of the real Australian. They are people of literally no account. As Clive Palmer said last week: ‘In Canberra they have the best roads, but nobody to drive on them’. However the utopian Canberra was also devoid of actual people, the few people that appear in the photographs are national cyphers, actors in a political fantasy, like the schematic figures that occur in architectural drawings.

So I’ve collected tourist brochures and NCDC publications from the utopian period of Canberra, making my own archive. Using an ‘Office Works’ aesthetic I have covered up the generic photographs with coloured sheets of A4 paper, obscuring the various civic vistas of national potentiality but revealing hapless pedestrians or passers by accidentally caught in the photographer’s camera, thereby pulling them out of their unwitting role as national cyphers, an perhaps returning to them their individuality as people.

My work is cool and ironic, it is a million miles from the fervent spiritual juju of indigenous artists. It is affectionate, rather than interrogative. But nonetheless I think that on some level we are all engaged with the same occultish power of the archive.