I can’t remember why Colin and I didn’t call it ‘Seven Sydney Heterotopias’, since it’s obviously inspired by Foucault. It was shot on my Linhof 6×9. 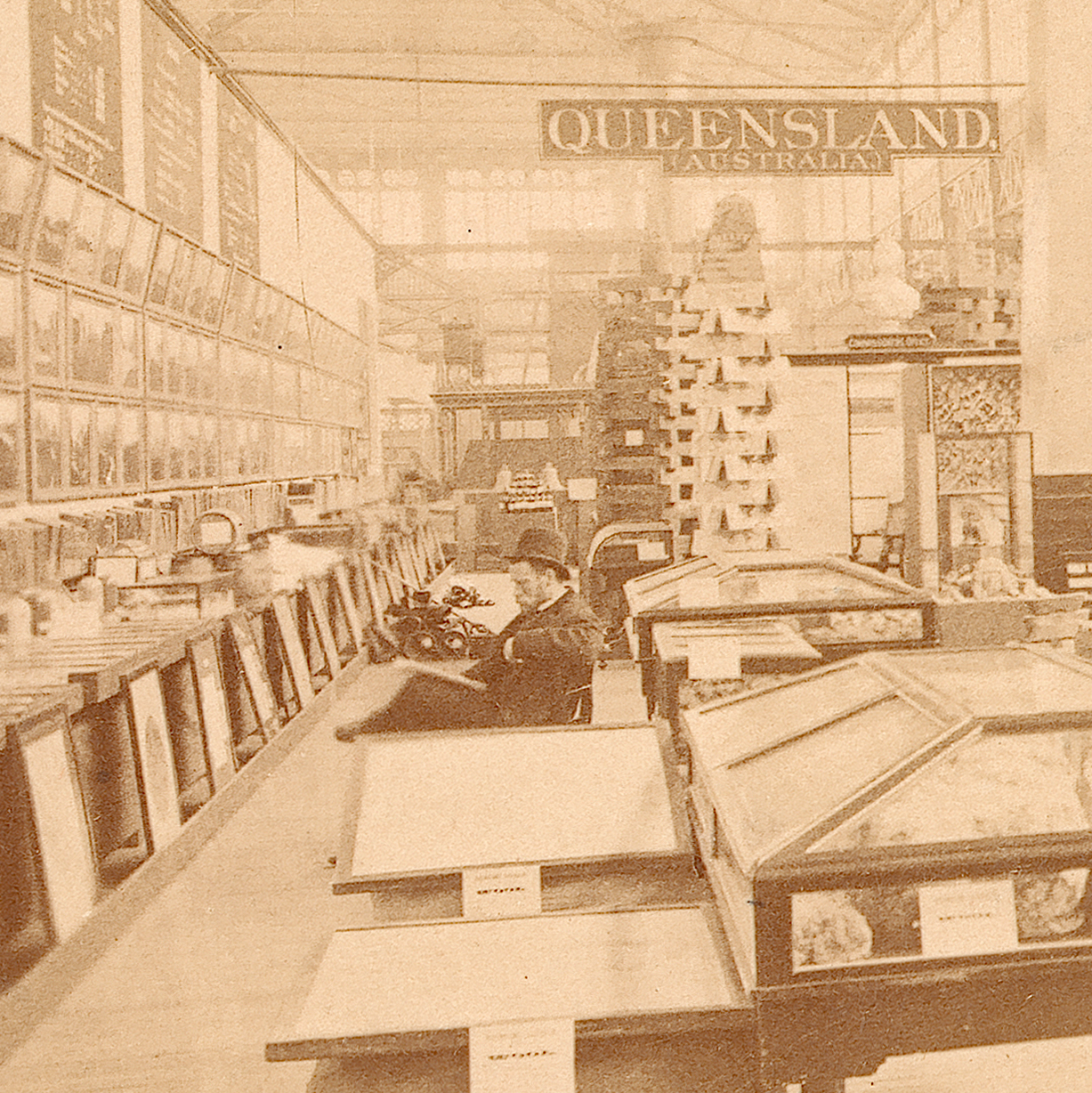 Richard Daintree is well known as an Australian colonial photographer and geologist. I look at six international exhibitions he created from 1872 to 1879 that promoted the colony of Queensland by systematically integrating spectacular grids of painted photographs with displays of scientific samples. By analysing installation views, I argue that the popular success of these exhibitions came from the use of various new photographic technologies within the space of the exhibition, where the frontier directly interacted with the metropole. Further, I argue that Daintree’s personal passion for the science of geology profoundly structured the colonialist narrative of his exhibitions, which combined the latest apparatuses of scientific knowledge and imperial communication, revealing him to be an innovative and internationally significant creator of synthesised exhibitionary experiences.

The exhibition ‘Martyn Jolly’s Phantasmagoria of Magic Lanterns’ at the Canberra Museum and Gallery, 2020, was curated by Virginia Rigney, designed by Greer Versteeg, and installed by Gary Smith.

We displayed 560 slides in a large light box.  Grids of 85x85mm square holes, each and 13mm apart, were laser cut into sheets of 4.5mm black acrylic. These were laid on 3mm clear backing acrylic, loaded with slides arranged in groups and sequences, and topped with a cover sheet of clear 2mm acrylic. The sandwiches were then taped around the edges and vertically held by a wooden frame against the inside doors of four bays a large display case. The front of the doors were covered with self-adhesive black vinyl except for the blocks of slides. The slides were lit from the front by ambient LED light, which allowed visitors to see the labels, and they were backlit through UV filtering film by fluorescent light bounced off the back wall of the case.

Interpretative handouts nearby were keyed with thumbnail images to allow visitors to find information and commentary about individual slides and slide sets within the overall grid.

As well as square glass slides, wooden mechanical slides were also displayed on glass shelves. These were lit from the front with LED lights, while the transparent painted glass images were lit from behind with electroluminescent panels trimmed down to size from 100mm x 100m sheets. The colour of each EL panel was corrected with an 81a photographic filter, and UV filtered with film. Each sandwich of EL panel, filter and UV  film was lightly attached to the rear of the slide with conservation tape and individually wired into a low voltage circuit.

These displays were augmented with:

Interpretive text was included in the digital projection:

For more information search Heritage in the Limelight

An interview I did with Katrina Sluis from the Digital Programme of the  Photographers Gallery, London, is now up at Daniel Palmer and myself’s Photocurating site. Check it out. There’s one there Daniel did with Ian North too. While you’re there have a look at our Timeline and see if you can spot anything we’ve left out. Then let us know. We still need more installation shots.

Published in The Photograph and Australia, edited by Judy Annear, Art Gallery of New South Wales, 2015

Photographs were never just images, they were always also things: objects to be touched or held, given or received, hidden or revealed, kept or destroyed. Photographic historians are paying increasing attention to objects such as photographic albums, and as they do so new insights into the way people once loved, shared and remembered are opening up to us.[1] But, as we look afresh at these old albums, connections with the way we use photographs today are also emerging, even though photographs are no longer the things they once were.

On 18 October 1860 a Sydney merchant announced: ‘We have received per mail a few photographic portraits of The Queen, the Prince Consort, and all members of the Royal Family. They have been taken from the life by Mr Mayall of Regent Street and are highly interesting from their truthfulness and unexaggerated appearance’.[2] The royal portraits were in the new carte-de-visite format – full-length portraits photographed in sets of eight by special multi-lens cameras and glued onto small mass-produced visiting cards. By early 1862 Sydney stationers were advertising another new commodity, the carte-de-visite album.[3] These albums had thick, decorated pages with pre-cut slots to hold cartes de visite. By July that year the Sydney photographers Freeman Brothers were announcing that they had ‘arranged a series of variable and appropriate backgrounds, so as to produce increased effect and add interest to the pictures […] in order to meet the increasing demand for these elegant varieties of the photographic art’.[4] The global carte-de-visite craze had hit Australia – the product of the coming together of an international postal service, a modular album, and a standardised photographic format. A popular poem that was placed on the first page of many Australian albums instructed the reader on how to use this new object:

Yes, this is my album

But learn ere you look:

That all are expected

To add to my book.

You are welcome to quiz it

That you add your own portrait

For others to quiz[5]

The album was therefore a site of mutual obligation and reciprocal exchange. Mayall’s portraits, which reportedly sold in their hundreds of thousands around the empire, set up the royal family as the template for all the other families in the colony, while carte-de-visite albums became a physical manifestation of one’s place in a rigid social system. As she tucked images of the famed, such as those of the royal family with their ‘truthfulness and unexaggerated appearance’, into the same intimate pockets as the portraits of people she knew, each album’s owner stitched herself tightly into her immediate family as well as concentric social circles extending all the way up to the stratospheric reaches of royalty. The Sydney Morning Herald quoted one satirist who poked fun at the ‘claims to gentility’ the carte-de-visite album had unleashed; but his social vignette also points to how tactile the albums were, how startlingly immediate the portraits were, and how the combination of portraits was animated by a compiler’s narration:

You place it in your friend’s hands, saying, ‘This only contains my special favorites, mind’, and there is her ladyship staring them in the face the next moment. ‘Who is this sweet person?’ says the visitor. ‘Oh that is dear Lady Puddicombe’, you reply carelessly. Delicious moment![6]

There was much that was formulaic about the carte-de-visite’s iconography. The ‘series of variable and appropriate backgrounds’ Freeman Brothers arranged for their clients would have been necessarily limited, and the repertoire of poses, derived from paintings, equally formulaic.[7] But cartes de visite allowed the middle classes to ‘perform’ themselves as they wanted to be seen, then socially articulate themselves within the juxtapositions of the album, and finally even to see themselves ensconced in global networks. These were all powerful forces so, not surprisingly, albums themselves began to appear as talismanic objects within carte-de-visite portraits. Townsend Duryea, for instance, photographed a young Moonta woman gazing wistfully off into the distance; we don’t know whom she is thinking of, but we are certain their portrait is in the album which sits open in front of her (p xx).

Not all nineteenth-century albums followed the modular conventions of the pre-made carte-de-visite album; some were surprising informal. Around Christmas-time 1858 Louisa Elizabeth How, the wife of a wealthy merchant, briefly took up photography.[8] Her photographs of visitors to her harbourside home provide an insight into the day-to-day social life of friends in a domestic space. The settlers John Glen and Charles Morrison lounge with stereoscopes and stereo cards – an earlier photography craze – while William Landsborough, just returned from opening up new land for pastoral claims in southern Queensland, sits stiff-leggedly. His young Aboriginal companion ‘Tiger’ has obviously been told by How to wedge his elbow on the back of Landsborough’s chair in a fraternal gesture. He loosely holds his doffed cap in one hand, but hovers his other hand just above the explorer’s shoulder, barely touching it with his stiff fingers.

Albums such as How’s, which take us so closely into the bodily interrelationships of colonial Australians, are extremely rare. More common are the large, elaborately hand-painted, collaged scrapbook albums that became popular among middle- and upper-class women in the late 1860s.[9] Mrs Lambert, the compiler of one of these albums, Who and what we saw at the Antipodes, not only records the social circles of Sydney’s colonial elite, but also their houses and drawing rooms. For one photograph she flung open the curtains to her own drawing room at 46 Phillip Street. Though the streaming sun reduced the exposure time, Edith Gladstone, the young sister of Countess Belmore, the Governor’s wife, still has to hold her head to keep it from moving while she is photographed reading at a desk. There is an air of casual immediacy to the image, and a domestic informality is revealed as our eye wanders through the clutter of novels, albums and knick-knacks.[10]

Another album, from the Lethbridge family of Queensland pastoralists, contains a lovely, and remarkably modern-looking, portrait of a fresh-faced young girl leaning back in her chair and looking frankly into the camera with her fingers laced behind her head. Somebody, at a later date, has added the necessary metadata in pencil: ‘Effie Dalrymple, sister to Florence Lethbridge’. Thanks to those worker-bees of history, the family genealogists, and the digitisation of photographic collections, it only takes Google 0.45 seconds to find me another image of Effie, this one taken in 1900 after she had been married for twenty years and borne four children to the Mayor of Mackay, David Dalrymple. In the image that Google delivers, her face is now set hard and her hair tightly drawn back.

To jump from a nineteenth-century portrait album to the internet is now an automatic leap. And plenty of people have noticed the structural similarities between carte-de-visite albums and Facebook.[11] This comment from 1862 about the process of being turned into a carte de visite seems remarkably familiar today:

you have the opportunity of distributing yourself among your friends, and letting them see you in your favorite attitude, and with your favorite expression. And then you get into those wonderful books which everybody possesses, and strangers see you there in good society, and ask who that very striking looking person is?[12] 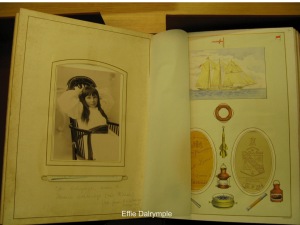 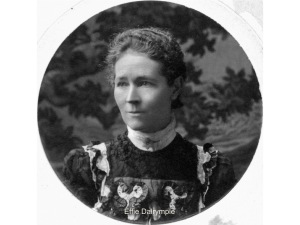 Nineteenth-century albums mediated between the private and the public, allowing people to invent themselves and to feel connected with each other over vast distances of space and time, networked into global, virtual communities. Just like online photo-sharing today.

[5] A carte-de-visite copy of this poem appears in an album in the papers of Isobel Mackenzie, State Library of New South Wales, MLMSS 2996/SPG/1; another is in the State Library of Tasmania, TL.P 779.POR. The poem is also cited in Reeder 1999, p 182; Deborah Chambers 2003, p 99; and Risto Sarvas & David M Frohlich, From snapshots to social media: the changing picture of domestic photography, Springer, London, 2011, p 41.

[9] For international examples of these albums see Elizabeth Siegel, Playing with pictures: the art of Victorian photocollage, The Art Institute of Chicago, Chicago, IL, 2010.

[10] Martyn Jolly, ‘“Who and what we saw at the Antipodes”: who and what?’, martynjolly.com/writing/nineteen-century-albums/, accessed 30 June 2014.